A fervent spokesperson first, disabled after: Has the media finally got it right?

The last two weeks of September saw a fair bit of media coverage from the 76th session of the United Nations General Assembly (UNGA). Political gripes and handling of predominant world crises made headlines across countries.

News around India and Pakistan tends to invoke a gamut of reactions and a sea of emotions. Especially when it comes to the regional conflict surrounding Kashmir. Otherwise uninterested in the usual furor, a Pakistani diplomat’s address caught my attention.

The image of a woman fiercely defending her nation, reading from a Braille script at a global forum, challenged several stereotypes in one go.

To set the context, Saima Saleem struck back at her Indian counterpart, Sneha Dubey, after the latter made a fiery speech accusing Pakistan of playing the “victim of terrorism” while fostering terrorists in its backyard.

In response, the Pakistani delegate said that occupied Kashmir was not a “so-called integral part of India nor is it India’s internal matter”.

Beyond this cross-country (s)he-said-she-said, two young women stood out for their professional abilities. And the world watched.  Bursting myths and contesting societal perceptions, there were a lot of ‘firsts’ at play.

Saima Saleem happens to be the first visually impaired civil servant of Pakistan. A speech was read out in Braille for the first time at the UNGA.

Both women won accolades from their country’s leadership, media and the average citizen. The focus of news reports was on the issue at hand, and not on any vulnerabilities, pertaining to gender or disability.

It was truly ‘person’ first. Something activists and disability advocates have been rooting for.

Although the language used by the media wasn’t completely disability-inclusive, but one is willing to forego that, on grounds of ignorance. So even though Saleem was addressed as ‘visually impaired diplomat’ and ‘first blind woman’, the narrative didn’t obsess with any sort of heroism. Yes, she was acknowledged as an inspiration to many, but mostly because of her knowledge and craft. Her blindness was merely a condition, something that became evident as she ran her fingers on the embossed dots.

Pakistan’s largest and oldest English newspaper, Dawn covered the story with no mention of Saima’s vision impairment except in the cited tweets applauding her. 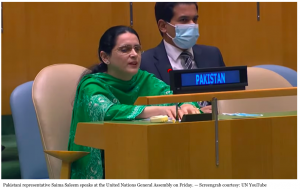 She is currently a counsellor with the Permanent Mission of Pakistan to the United Nations in New York. She has a degree in International Law with a specialisation in Human Rights Law from the Geneva Academy of International Humanitarian Law and Human Rights. She went to the Georgetown University, School of Foreign Service, in Washington DC on a Fulbright scholarship. She also has a master’s degree in English literature from the Kinnaird College for Women in Lahore.

Saima was diagnosed with Retinitis Pigmentosa, a degenerative eye disorder that resulted in complete sight loss when she was thirteen.

When she applied for Central Superior Services (CSS), she requested the Federal Public Service Commission (FPSC) to conduct a computer-based exam for her. But her request was rejected. Refusing to cave in, Saleem proceeded with her case quoting an ordinance that was passed in 2005 which stated that the government will facilitate candidates with visual impairment to take exams on computers. Her application was approved and she passed the competitive exam, only to face another roadblock. The FPSC didn’t allow candidates with blindness to apply for foreign service. Determined to become a diplomat, she managed to persuade the panel, thoroughly exhibiting her negotiation skills.

She joined the Foreign Service of Pakistan in 2009. A strong advocate of global peace and interfaith harmony, Saima describes herself as ‘a diplomat with insight, not sight’. Interestingly her brother, Yousaf Saleem became the first Pakistani jurist with vision impairment in 2018.

India also has its own share of bureaucrats (and professionals) who are persons with disabilities. Like Saima, they too have worked hard and pursued their passion to reach their current positions.

On several occasions in the past, I have emphasised on the need to erase stereotypes with consistent media representation of people who lead fulfilling and dignified lives despite disability. I must confess, the recent coverage reinstates my faith in the media.

Like I said there were many firsts here, one of them is the media getting the story somewhat right. Kudos to that!

In this interview section we talk to successful visually impaired persons to get an insight into what makes them tick.

END_OF_DOCUMENT_TOKEN_TO_BE_REPLACED

Learn how Eyeway was able to help these people with the right knowledge and guidance.